The Tories spin and lies are out in full force this summer. Whilst they try to appease their cronies and supporters, we’re left bowing and scraping for any crumbs that are dusted off to schools to help us teach, support and protect pupils, the communities in which we work and our own staff and families.

Schools are struggling under the current funding cuts, as well as to financially implement safety measures for returning staff and pupils.  So the fanfare announcing £14 billion education funding over three years sounded too good to be true – and funnily enough it was.  An additional £2.6 billion will be shared out for 2020-21 but it will not be divided fairly. Tory plans to ‘level up’ funding across schools will mean those with more affluent pupils get the greater increases. The Education Policy Institute (EPI) shockingly worked out that in England’s primary schools, children in receipt of free school meals will receive a real-terms funding increase of 0.6%, compared to 1.1% for all other pupils. BAME pupils will see 0.9% less than White British pupils in primary, as well as 0.4% less in secondary provision.

It’s almost as if the government has forgotten their other set of school propaganda: the need to open fully in September due to a rising gap between academic progress for disadvantaged and non-disadvantaged pupils.  It’s not even been three months since the government promised laptops for families who couldn’t afford to access on-line learning, and not even three weeks since they promised money for individual tutoring to close this gap.  But should this surprise us?  Throughout this pandemic the government and the Tory press has shown its true colours of dislike and lack of care for ordinary people and schools.  Teacher-bashing seems to be the new right-wing sport of choice, claiming that we are ‘immoral’ for caring about the safety of our communities, as well as ‘selfish and lazy’ for suggesting that creating entirely new curriculums of blended learning that would allow for fewer to be in school buildings at any point.

On the 21st of July, teachers’ annual pay award was announced.  But the government wasn’t sure how to present this.  In one press release, they announced a pay rise for many in the public sector to recognise their ‘vital contributions… on the frontline during the battle against COVID-19’, whilst in another they claimed it was to make teaching ‘attractive to the most talented candidates’: newcomers, who obviously have not yet worked through this crisis.   What a wolf in sheep’s clothing these attacks are!  Trying to pretend that they want to recognise the extremely hard and testing year this has been, yet then sneakily announcing that this raise will be heavily weighted to new teachers. Moreover, it’s entirely unfunded!  Schools will have to provide for this from the budget already shared for funding, slashing this to half the amount if all teachers are to actually see this pay increase.

However, this can’t be a shock to the unions.  Although the NEU put in a claim of 7% (at least 5% below what is needed to level out the pay cuts seen in the last decade), no national fight is being organised.  Instead, overworked reps and case workers in local areas will battle individual schools separately if individuals complain.  How do we know this?  Because this is what happened last year, when the government said that 2% would be left to schools to pay.  Why wouldn’t the government push harder this year when no effective fightback was mounted last year?

The NEU has seen 20,000 new members join in the last few months.  A rallying cry to those and existing members to join a national fight back to demand the pay increase deserved for all education staff, as well as fighting on a return to full schooling done in the interests of health and safety, rather than the economy, could force the government to do what’s morally right.  If all staff in schools: teachers, learning support assistants, cleaners, office staff, building staff in the NEU, NASUWT, NAHT, Unison, UNITE, GMB and any other staff unions joined together to fight for a pay increase and health and safety for all staff what an impact that would have!  All education staff have faced the cuts in education, and deserve a pay rise that reflects the difficult nature of their job, and the frequent unpaid overtime that’s expected.  Nobody chooses to work in a school for the pay, however, that doesn’t mean that support staff and cleaners should be facing poverty wages or term-time only contracts that often result in being paid under the minimum wage and therefore needing second or third jobs to ensure they earn enough to survive.

Even better than school-wide action, would be if it was a joint action across the public sector.  Education staff joined health staff this week at demonstrations across England and Wales calling for a 15% pay increase for health staff, recognising that not only have they been working non-stop through the pandemic; but also that, like in schools, health services have been under staffed, under paid and under resourced for many years.  This could be the start of a campaign like the pensions fightback in 2011 when 60% of schools in England were closed and 6,000 hospital operations rescheduled as up to two million public sector workers went on strike.  But it needs a strong, united call from union leaders.

People generally choose to work in the public sector, as they want to give back to their communities and to help others.  The government knows this and it’s why they get away with this treatment time and time again.  However, this goes deeper than just this government.  Under capitalism, wages need to be kept low to maximise profits for those who make them. This means we need to fight to get what is needed.  We need to fight to get a fully funded education system.  We need to fight for all staff to get reasonable terms and conditions, which includes annual pay rises above inflation.  And we need to fight, so groups of pupils don’t get less due to where they grow up, their class or their ethnic background.  But more than that, we need to fight for a socialist system.  One where education is under democratic workers’ control, so that funding is allocated where it is needed and the curriculum is adapted to support, stimulate and educate all children and young people.

U-turn won – but battle in schools is far from over

Pay freeze threat must be answered with co-ordinated action 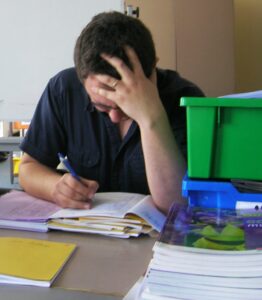 Organise to win on workload and pay